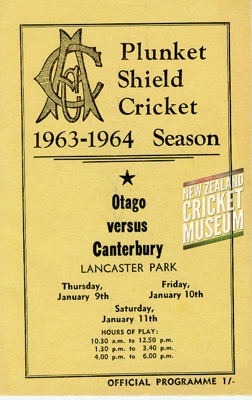 The official programme for 1964's Plunket Shield match between Canterbury and Otago, played at Lancaster Park, Christchurch on January 9, 10 & 11 1964.

After a dominant first innings' performance by Otago which saw them gain a lead of 133 runs, Canterbury turned the tables in the second innings to win by 5 wickets.