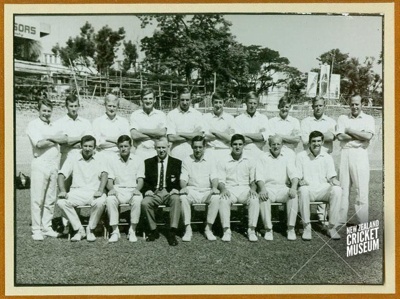 New Zealand's first tour to the subcontinent came in 1955-56. It would not be fondly remembered by the tourists, and losing 2-0 against both India and Pakistan was only a small part of it. Bert Sutcliffe, in Joseph Romanos' <i>John Reid; A Cricketing Life</i>, explains:
<blockquote>"We were guinea pigs in 1955. [...] Apart from the day we arrived, there was only one other day on which every player stood upright."</blockquote>
The next tour, in 1965, saw improvements on and off the field. The tourists fought valiantly, only being overwhelmed in the fourth and final Test to lose the Indian series 1-0. They had less luck in Pakistan, going down 2-0 across 3 Tests. Off-field, touring with a doctor reduced some of the discomfort felt by previous teams.

In 1969, the learnings of the two previous teams went a long way to helping the team stay healthy and competitive. After India won the first Test, New Zealand fought back and won the second by 167 runs, <b>their first victory on the subcontinent</b>. 50s from Dowling, Congdon, Burgess & Turner led the team to a defendable total, which left Howarth to claim 9 decisive wickets in the match. The 3-Test series was shared 1-1.

In Pakistan, the team continued to make history, <b>claiming their first series victory over Pakistan</b>, 1-0. Burgess and Turner would both hit Test centuries in the Pakistan series, while Howarth claimed 16 wickets.