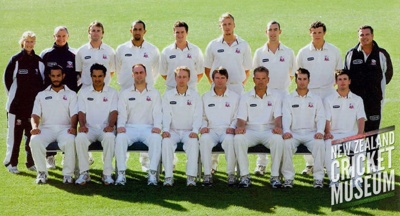 The team photo of the 2004-05 Auckland side that won the State Championship.

Auckland and Wellington met in the final after finishing the season as the top two sides. After registering a 90-run first innings' lead, thanks to Andre Adams' 5 for 39 and Tama Canning's 106, Auckland went on to win by 7 wickets. In the second innings, Auckland's Kerry Walmsley claimed 5 for 94 while Richard Jones hit 114* to lead Auckland's chase. For Wellington, Mark Gillespie claimed 6 for 81 in Auckland's first innings. Northern Districts won 6, lost 1, drew 1 and had 1 no result during the season.

The State Championship was New Zealand's First Class competition while State were the sponsor and the Plunket Shield was in storage at the New Zealand Cricket Museum.