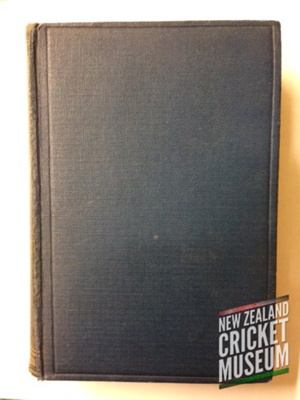 Anthony (Tony) Wilding is most famous as a record-setting tennis player, winning the singles and the doubles at Wimbledon four times respectively. But he was also a talented cricketer in a family where New Zealand's summer game was a particular passion.

Anthony's father, Frederick, represented Canterbury in 34 First Class matches and featured for a New Zealand XV in a match against the Australians in 1896. Anthony's sporting passions saw him follow his father into the Canterbury cricket side. His record was modest, however, playing just two First Class matches before his tennis talents took over.

Soon after the start of WWI, Tony Wilding joined the Royal Marines. On the 8th of May 1915, Wilding noted that, for the first time in the war, he was in a position that put him at the end of a gun. Sadly, the next day he was dead after a shell exploded on the roof of his dug out shelter.

This biography was written by his friend, and fellow-tennis player, Andrew Wallis Myers in 1916.