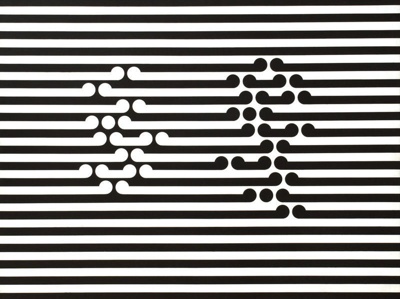 Gordon Walters made his first studies using the koru motif in 1956. His early interest in Maori art was reinforced in the 1940s by émigré Dutch artist Theo Schoon and in the '50s by experience of abstract art in Europe. Over the following decade he developed and simplified the ideas expressed in those early studies, culminating in the painting Te Whiti, 1964, and this work, exhibited at the artist's first major one-person show in 1966. For Walters, the koru motif was a way of making sense of his environment. It reflected the obvious influence of Mäori köwhaiwhai and tä moko, but also of Oceanic art in general. To this potent mix he added a sophisticated understanding of geometric abstraction, with its ideas of clarity and structure, interest in the relationship of figure and ground, and the needfor precise technique. Walters' koru paintings can thus be understood as a profound meeting of Polynesian and European art traditions, where the value of each is upheld. In Painting Number One two clusters of black-and-white koru forms are balanced at each side of the composition. Different in number, the black and white forms have the same visual weight, thanks to Walters' understanding of positive and negative effects and his subtle tempering of their spacing. Walters continued to work with the koru over the next three decades, exploring every possible variation of the motif to produce one of the most consistent bodies of painting in New Zealand art. (from The Guide, 2001)