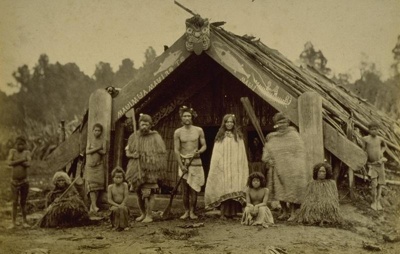 In the mid-1870s James Bragge ventured out from his Wellington business, the New Zealand Academy of Photographic Art, to begin a massive photo-essay, which later became a series of photo-albums entitled Wellington to the Wairarapa. The contact prints were made with his huge 10 x 12 inch plate camera and were intended to illustrate how immigration was transforming the appearance of the lower North Island. They concentrate on Päkehä habitation, yet some of the more remarkable images in Bragge's albums are of Mäori. Location photographs of Mäori, who were mostly living away from towns, were uncommon as the process of wet collodion negative photography was still dominant; it required lengthy preparation, exposure and development time, all of which had to occur on the spot. This whare was sited at Mangakuta Pä, close to Masterton, and pä life was under pressure as a coach service was bringing many settlers into the area. Hamuera Pakaiahi, seated and wearing a korowai cloak at left, and Rewiria Ngatuere, standing in her täniko-edged korowai in the centre, were each leaders of the whänau at Mangakuta. The painting on the right-hand maihi or bargeboard shows Maui with his brothers catching the fish which became the North Island. His brothers' names are on the left-hand maihi, Mäui-mua and Mäui-roto. (from The Guide, 2001)