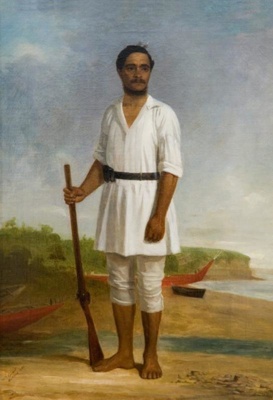 Portrayed holding a musket on the Örākei foreshore around 1862, Hami Hone Ropiha - also known as John Hobbs - served as Governor George Grey's orderly in the Northern War of 1845-46 and was rewarded with a grant of land. Art historian Una Platts described the ensuing controversy: '. . . Sir George Grey, in his benevolently autocratic way, had rewarded him in 1853 by the gift of this piece of land. It was part of Official Bay, Logan Campbell's "Exclusion Bay", and the gift was commented on angrily by the editor of the Southern Cross, in answer to a complaint written in a suspiciously similar style. Both pointed out the enormity of giving this specific piece of land when worthy citizens, who had every right to live in this "commanding and costly situation" were unable to obtain an allotment there. However valuable had been the services of this John Hobbs, and the editor did not deny this, Sir George had no right to do this thing. It was "the duty of the public loudly and indignantly to remonstrate". But Sir George obviously had had his way'. Wrangles over commanding and costly waterfront land in central Auckland seem to be a longstanding tradition, continuing to this day. The portrait was in Grey's drawing room in Mansion House on Kawau Island and one of his founding gifts to the Gallery. (from The Guide, 2001)