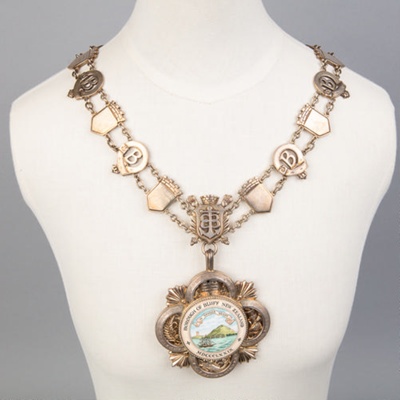 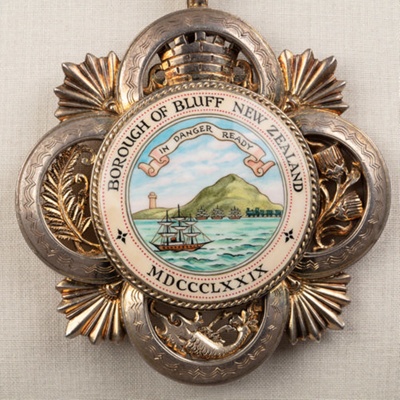 This is the mayoral chain of the Bluff Borough Council.

Birmingham jewellery company Thomas Fattorini Ltd manufactured the Bluff Borough mayoral chain in 1928. At this time, the previous mayors of both the Campbelltown and Bluff Borough Councils were retrospectively engraved into the shields which make up the chain. In 1928, J Terrance was mayor and from him onwards the names of Bluff mayors have continued to be engraved into the shields until 1983. The last engraving is of B W Pagan who was the mayor of Bluff from 1983 until the Borough merged with the Invercargill City Council in 1989.

A Brief History of the Bluff Borough Council:

Unitl 1917, Bluff was known as Campbelltown. JT Thomson surveyed the town in 1856 and named it Bluff, however, Provincial Superintendent Captain Cargill ordered that the town be named Campbelltown after the New Zealand governor’s wife who was a Campbell. The Campbelltown Borough Council was formed in 1878, shortly after the establishment of the Bluff Harbour Board. G.W. Nichol served as mayor from 1878-1880.