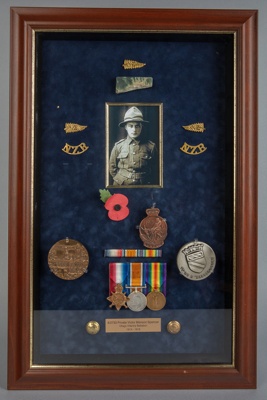 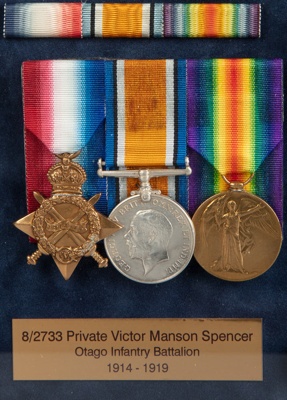 The shadow box also contains Victor’s ANZAC Commemorative Medallion. Additionally, there are Steenwerek and Ville D'Hallencourt Commemorative medellions which were gifted to Victor’s second cousin Spencer Morrision. Parts of a World War One New Zealand uniform are also present in the box including three NZ Fern collar badge, two NZ Rifle Regiment Shoulder Titles and two buttons. Victor descended from the first Bluff Pākehā settler, James Spencer and his Māori wife, Mere Kauri. His Ngāi Tahu, Kāti Māmoe and Waitaha whakapapa are represented through the toki at the top of his photograph.

Victor’s short life was marred by tragedy. Born in Otautau in 1896, when Victor was only two, his six-month old brother, James died. Then, his mother, Mary, died from Tuberculosis. Victor went to live with his Aunt, Sarah Goomes in Bluff and only a few years after, Tuberculosis took his father James too. By the age of ten, Victor was the only remaining member of his immediate family.

Despite the tragedy of his childhood, Victor was eager for life. An athletic boy, he was a cox for a four person rowing team and after leaving school, he became an Apprentice Engineer with local firm Metzger & Matson. Victor’s ambitious nature swept him up in the First World War frenzy and, lying about his age, Victor enlisted at 18.

Victor’s eagerness continued when he reached Gallipoli, a postcard to his family tells of his hopes for a promotion and his gratefulness for a food parcel of muttonbirds. On the Western Front, his mental state changed. In July 1916, a raid on the German line resulted in mass casualties. The remaining men were then left in the line for an entire month without relief. When they finally were relieved, Victor was admitted to the Field Ambulance suffering from Shell Shock. A month later, he was sent back to the front. Victor almost immediately disappeared. Military Police arrested him two-weeks later and charged him with desertion resulting in a penalty of 18-months imprisonment. Only nine-months later he was back at the front. Again, Victor went missing. This time he was sentenced to death by firing squad.

Chaplain Hoani Parata performed the last rites and Victor, thinking of his family asked the Chaplain to apologise for having caused them anxiety with regards to his career as a soldier. Then, Victor was tied to a post and blindfolded. Victor’s final words asked “Are you there Padre?” answered with 'Yes lad, I’m here'. At 6.45am on the morning of February 24, 1918, Victor was shot. His family received a four-line notification of his death and he became a hidden story in the whānau history.

Spencer Morrison, Victor’s second cousin who donated the medals, only learned of Victor when he enlisted. 'I came home and said, "I’ve joined the regular force", and my father said, "'I think there’s something you should know."' The family didn’t speak about it because of the shame it brought.' This changed in 1996 when MP Mark Peck, sought a redress for the five New Zealander soldiers executed during World War One. In 2000, the New Zealand government issued a pardon for Victor and the four other men executed for having deserted as a resulted of Shell Shock. In doing so, the government formally acknowledged that when Victor deserted he was suffering from a mental illness and should not have been shot.