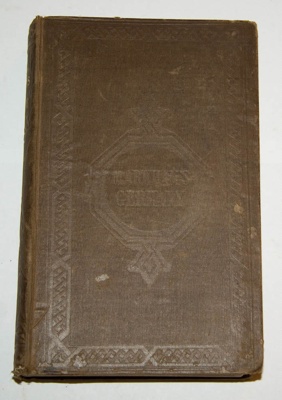 Book, 'A History of Germany'

Blanche, known as Blannie to her family, was highly educated, not only in the expected female norms for the Victorian era, but also in “book learning” as well. Therefore, this book would have aided Blannie in her studies of history.

During the 19th century, educating girls was seen by many parents to be fruitless. This was because women were expected to marry, have children and run a household, all of which did not need formal education. (1) However, Blannie’s parents, Vicesimus and Blanche Lush, stressed the importance of education and endeavoured to educate all of their children, including their four daughters. In 1851, Blannie’s father established a school at the All Saints Church in Howick, Auckland, where he served as the Anglican minister. In his journals, Vicesimus states that the school role consisted of 12 boys and 15 girls, which included his daughters, Blannie and Charlotte. Blannie was taught mainly by her father and also attended Miss Hill's private school for girls for a period of time. (2) As part of her lessons, Blannie’s father would often take her to cultural places such as the opera and theatre. One excursion to the Auckland Museum on 22 July 1856 was described in her father's journal: "...we met Blannie's friend Mary Abraham, and I took the two young friends to the Museum, at which they were delighted. There is really a very creditable collection of shells, birds, reptiles, stones and curiosities..." (3) When she got older, Blannie was required to teach her younger brothers and sisters before they were old enough to attend school.