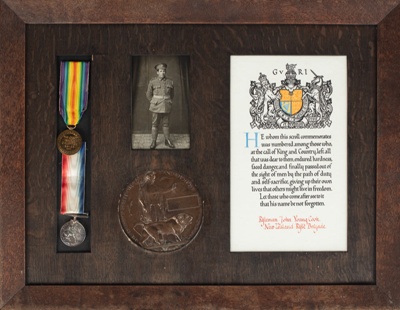 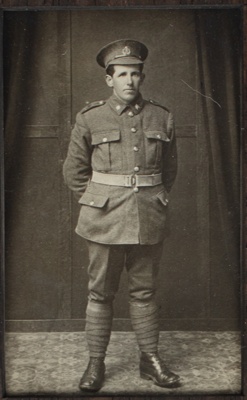 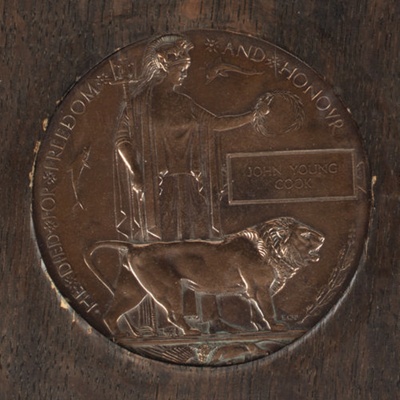 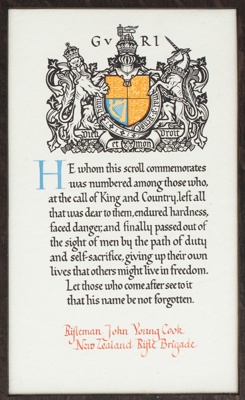 Contained within this wooden frame is a photograph of Rifleman John Young Cook, his British Medal Medallion, his Victory Medal and his Memorial Plaque known as a Dead Man's Penny. Additionally, there is a memorial scroll.

Having been a volunteer in the Murihiku Mounted Rifles, John enlisted for World War One at Wyndham in 1916. He served on the Western Front in the 1st Battalion, 3rd New Zealand Rifle Brigade in D Company. John was killed in action on 30 August 1918 aged 36. He is buried in the Bancourt British Cemetery at Pas de Calais, near Bapaume France.

John's brother, William Affleck Cook died at the Somme, France and is remembered on the New Zealand Memorial, at the Caterpillar Valley Cemetery, Longueval, France. When William enlisted in 1914, he listed John as his next-of-kin. At the time, John was working on the family farm 'Dunalister', formerly belonging to Dr James Menzies.