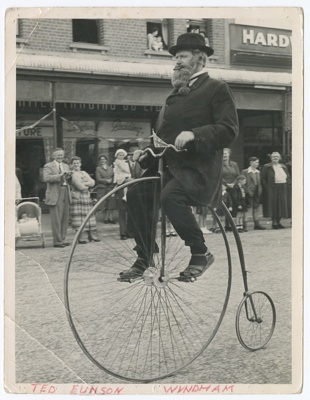 This is a photograph of Ted Eunson riding a penny farthing bicycle in the Southland Centennial Celebrations in 1956. We have the penny farthing in our collection. William Hall originally purchased it, and his youngest brother, John, found the bike good for getting gravel rash.

William gave the penny farthing to Alex Cranston and sometime later, Jack Hill who purchased the Cranston farm, rescued it from a gorse bush (possibly after is was crashed and left behind in a temper). Jack rode the penny farthing in the 1961 Edendale Factory Celebrations. Jack lent the bike to Digger Eunson who is possibly responsible for it being painted red.

The Penny Farthing was the first machine to be called a 'bicycle', but the official name was the 'Ordinary'. Other machines, including the 'Boneshaker' with wooden wheels and iron rims, had been invented, but in 1869 James Starley, a British Engineer, (later known as 'the Father of the British bicycle industry) improved on the design with an increased wheel size, a tubular frame and light-weight spokes to produce the Penny Farthing. They were difficult to manipulate, had a running-start and the dismount required jumping off. The front wheel, up to 2 metres in diameter provided a smoother ride over the cobbled streets and higher speeds with each rotation. The position of the seat over the front axle meant that a sudden stop often caused the rider to fall head-first over the handlebars (known as 'taking a cropper'), and often resulted in severe injuries.

The Penny Farthing was named after the British penny and farthing, the largest and smallest coins in use at the time. These bicycles became popular for use by the upper middle class and high society in Victorian times and membership to the British bicycle clubs required a recommendation. The use of Penny Farthings came to an end in the 1880s when others, including Starley's nephew, produced bicycles with smaller front wheels and pneumatic tyres, making a much safer option.

A novelty nowadays, treasured by enthusiasts and museums, they can often be seen at Victorian festivals and remain a lasting symbol of the Victorian era.