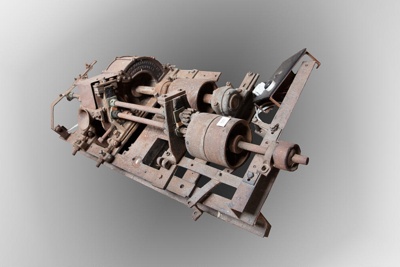 This is a scutcher, a machine introduced in the early 19th Century for use in the processing of flax. It was used to remove fibre from the woody stems of the leaves.

About the Flax Industry:

In New Zealand, flax mills were established close to swampy areas where flax (Phormium tenax) grew in abundance. The mills were recognisable by the loud, high-pitched whine from the machinery, heard from a distance, and the presence of hanks of the flax fibre hanging out on fences to dry.

Cutting the raw flax was hard, physical work, with a skilled worker able to cut up to three tons per day. Snigging came next, when bundles of the cut blades of flax were attached by snigging chains to a horse's collar and dragged to the drays, or in later days to lorries, for transportation to the flax mill. There the flax was fed into the stripper, two blades at a time, and the green outer leaf was separated out from the fibre. After washing, the hanks of fibre were hung outside on fences, or left to lie on the ground, where they dried and bleached with the weather. When the fibre had dried, the hanks were loaded onto a chain which moved them into the scutcher. This machine consisted of a revolving drum with iron beaters attached, which produced fine, silky fibre. This end product was pressed into bales and transported to factories in New Zealand to be processed mainly into cordage, or sent overseas to North America, Australia and Britain, where it was manufactured into rope, twine, chaff bags, and later into woolpacks, carpet and upholstery textiles.

About the flax industry in the Wyndham area:

In 1870 a flaxmill existed on two pontoons which were moored on the Mataura River at the Menzies Ford, Menzies Ferry. The mill was floated up and down the river to where the flax was growing on the riverbanks, saving much on costs. Also in the late 19th Century, flax mills operated in the Wyndham district, at Glenham, Tyneholm, Gorge Road, Flamborough, Mokoreta, Redan and Waiarikiki. These mills were important sources of employment, as the work was very labour intensive. Locally, the bales of fibre were transported to the Wyndham Railway Station or to Glenham which had its own railhead. By the 1970s manufacturing of flax became uneconomical as synthetics had come into use.

There were three flax mills at Redan but over the years only one remained. This was the mill at which Robert Johnston was employed in 1912, after immigrating to New Zealand from the Shetland Islands. (His wife, Margaret and family of six children joined him six years later). In 1935 the mill was sold to Robert's sons, Christopher, Andrew and William Johnston. During the Second World War flax milling was considered an essential service and the men at Johnston's mill worked long and demanding hours. From the 1930s to the late 1960s the mill impacted on the Redan district with up to eighteen men required to run the mill. The families resided in the mill houses with their children attending nearby Redan School, and the single men living in the working men’s huts. The mill closed in 1972 and the only evidence remaining is a restored hut with its distinctive brick chimneys situated close to the roadside on the Wyndham-Redan Road, east of Wyndham, a testimony to the hard toil undertaken by the men of the district.

In 1936 the Johnstons bought a brand new Ford V8 truck, known to be the first in the district with a metal cab, and being a blue colour, was known as 'The Blue Lorry'. A well-known sight in Wyndham, was the Johnston's truck passing through on its way to the flax block near the Māori Reserve at Tuturau. The horse stood on the truck deck, tied by rope to the front board and leaning over to balance around the corners. This was amazing enough, but in the evening the horse stood on top of the loaded flax bundles on the truck deck, being transported back home!