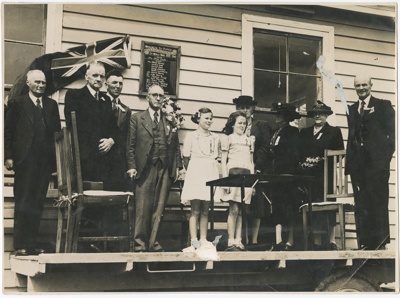 This photograph portrays the opening of the Mokoreta School Golden Jubilee celebrations on January 25th 1938.

The opening included a speech of welcome by the Chairman, Mr John Craig. Major Stanley Rice followed with his address on the trials and achievements of the pioneers, and made particular reference to Mr George Anderson and his late wife. Bouquets were presented by Miss Matheson to Mrs Blackie, Mrs Terry and Mrs John Bews and Mr Anderson received a badge from Miss Elaine Robinson.

Major Rice (on behalf of the Jubilee Committee), unveiled a memorial tablet in honour of the men of the district who served in World War One and said it was wonderful to think that a place of Mokoreta's size had produced so many soldiers.

Celebrations continued with decade photographs, a banquet, and on the Sunday afternoon a Jubilee Commemoration Service was held conducted by Rev. John Anderson and others belonging to the Anderson family.

Also present possibly in this photograph are Shirley McRae and Shirley Anderson.

Major Stanley Rice is stood with the walking stick in the centre next to the two young girls.