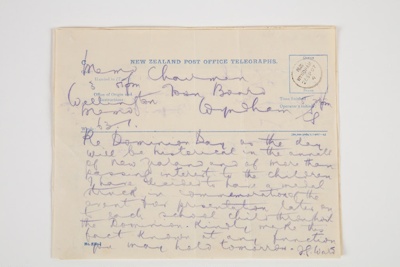 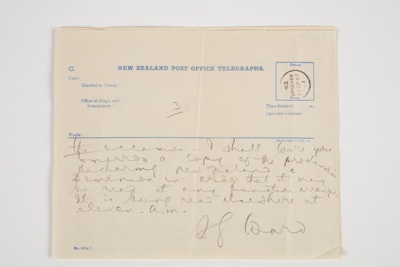 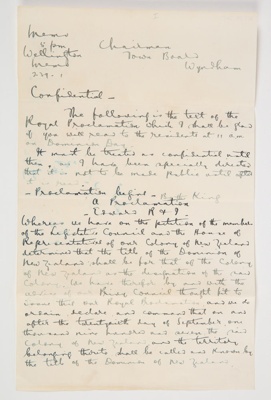 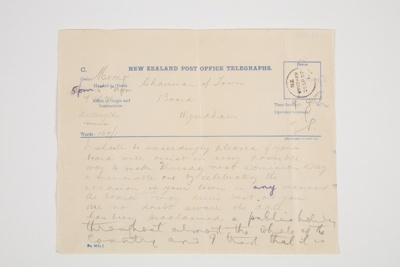 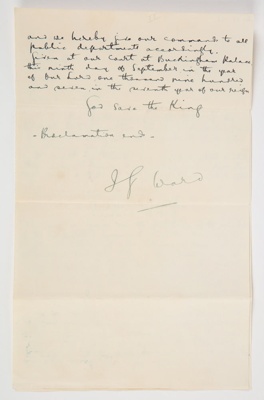 These archives relate to the Proclamation of New Zealand as a Dominion.
They include a confidential letter addressed to the Chairman, Town Board, Wyndham signed by Sir Joseph Ward, dated 23 Sep 1907.

One telegram addressed to The Chairman Town Board, Wyndham, received at 3.50 pm on 25 September 1907 from Sir Joseph Ward (I. J. Ward).

The letter received by the New Zealand Post & Telegraph Office at Wyndham addressed as 'Memo Confidential' to the 'Chairman,Town Board Wyndham', a valuable and treasured document in itself, was to be read and proclaimed to the residents of Wyndham at 11 am on 26 September 1907. It is handwritten in ink and signed on behalf of I J Ward. The Chairman of the Wyndham Town Board at the time was Mr George Hunter but this letter has been wired (sent by telegram) and handwritten at the Telegraph Office.

Confidential -
The following is the text of the Royal Proclamation which I shall be glad if you will read to the residents at 11 am on Dominion Day -
It must be treated as confidential until then, as I have been specially directed that it is not to be made public until after it is read.
- Proclamation begins - By the King
- A Proclamation
- Edward R & I
Whereas we have on the petition of the members of the Legislative Council and the House of Representatives of our Colony of New Zealand determined that the title of the Dominion of New Zealand shall be for that of the Colony of New Zealand as the designation of the said Colony. We have therefore by and with the advice of our Privy Council thought fit to issue this our Royal Proclamation and we do ordain, declare and command that on and after the twentysixth day of September, one thousand nine hundred and seven, the said Colony of New Zealand and the territories belonging thereto shall be called and known by the title of the Dominion of New Zealand and we hereby give our command to all public departments accordingly.

Given at our Court at Buckingham Palace, this ninth day of September in the year of Our Lord, one thousand nine hundred and seven, in the seventh year of our reign
God Save the King

The telegram received by the Wyndham Town Board Chairman on 24 September 1907 reads as follows:

'I shall be exceedingly pleased if your board will assist in every possible way to make Thursday next Dominion Day a memorable one by celebrating the occasion in your town in any manner the board may deem best as you are no doubt aware the date has been proclaimed a public holiday throughout almost the whole of the Country and I trust that it is not too late for this to be done in your town- also all education boards have been requested to arrange for school children to have a holiday and if you are unable to arrange a parade of any volunteers or various public bodies you could no doubt arrange for the school children to take part in some ceremony befitting the occasion. I shall wire you tomorrow a copy of the proclamation declaring New Zealand a Dominion in order that it may be read at any function arranged, It is being read elsewhere at eleven - a.m-
I J Ward'

The telegram addressed to The Chairman Town Board, Wyndham, and was received at 3.50 pm on 25 September 1907 from Sir Joseph Ward (I. J. Ward).
It reads as follows:

'Re Dominion Day as the day will be historical in the annals of New Zealand and of more than passing interest to the children I have decided to have a medal struck in commemoration of the event for presentation later on to each school child throughout the Dominion. Kindly make this fact known at any function you may hold tomorrow - I.J. Ward'

About New Zealand becoming a Dominion:

New Zealand became a British Crown Colony in 1841, but after declining to be a part of the Australian Federation, in 1907 became a Dominion of the British Empire.
On the steps of Parliament (presently the Parliamentary Library Building)
at 11 am, 26 September 1907, Prime Minister Sir Joseph Ward read out the Proclamation from King Edward VII. Lord Plunket, New Zealand's 14th Governor was at his side, with several thousand people being present.
This being an historical occasion, it was followed by the guns from around the forts in the harbour and the HMS Challenger, firing salutes. The band played and military and school cadets paraded and Maori performed the Haka - Ka Mate.
At a later date as in the information above, all New Zealand schoolchildren were issued with the Dominion Medal, which would have been a treasured item indeed.
The Dominion status gave New Zealand more independence and by 1926 was able to negotiate its own political treaties, the first was with Japan in 1928. Full independence came later. Today, New Zealand is known as a Realm.
For some years after the Dominion Proclamation, New Zealanders celebrated on 26 September with parades and events, and with some closures of businesses, until the 1950s.
South Canterbury still has Provisional Anniversary Day and is celebrated in September.

What happened in Wyndham to celebrate?

The Wyndham Farmer stated the following on Friday 27 September 1907:
'Dominion day was loyally and patriotically observed yesterday, in every part of New Zealand - Wyndham did its part at very short notice, too.
The Town Chairman (Commissioner George Hunter) and several other citizens, met at the Town Hall at 11 a.m., where the school children, who had been granted a holiday, were assembled. The Chairman read the King's Proclamation, and then announced a medal was to be struck in honour of the unique event of the day; a copy of it would be presented to every child of school age in the Dominion. The proceedings, which were necessarily brief, closed with the first verse of the National Anthem.'
It follows with 'The King's Message' and 'The President's Message'.