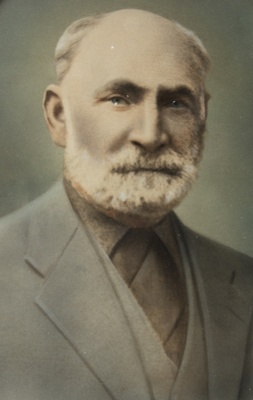 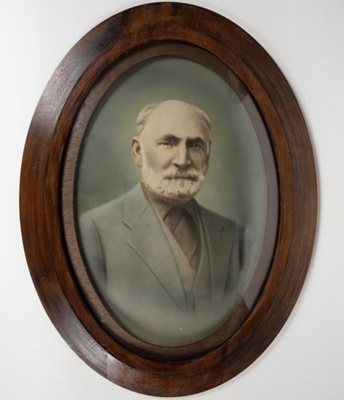 This is a framed and glazed hand painted portrait of Robert Stobo Wilson.

Born in 1856, Robert grew up on his uncle's farm just south of Glasgow, Scotland. In 1874, aged 18, Robert set out for New Zealand on board the 'Jessie Redman'. On board, Robert met Matthew Holms of Waimahaka who was transporting horses. Matthew employed Robert to look after the horses on the ship and when they arrived in the country he recommended him for a position as a ploughman at the Edendale Estate.

Three years later he married Irish woman Catherine Frances Hanlon who was working as the cook at the Estate. As there was no married accommodation they shifted to a hut at the 'Bight' sawmill at Seaward Downs/Kamahi. Robert worked transporting the sawn timber to Edendale where the dairy factory was being built. Shortly after this, they purchased 9 hectares at Menzies Ferry and built a four-bedroom home out of good timber for £75. This house stood until the 1990s, when the couple's great-grandson Malcolm Sinclair built a new home in the same place.

In 1886, they purchased land by the Island bridge and built a house on the terrace a few hundred metres from the Mataura Bridge. Here they cleared flax and milked cows.

Robert and Catherine loved to read and in 1905, they established a library at Seaward Downs. Initially this was just a cupboard in the school, at which their children were first day pupils, but eventually a purpose-built building was erected with over 2000 books in the collection.

In 1921 the Wilson's sold 'The Terrace' and moved across the Seaward Downs-Mataura Island Road to 'Glenties' for their retirement. In his retirement, Robert paid a visit to Scotland.

Robert Stobo Wilson died aged 84 on the 7th April 1939 at Seaward Downs and was buried 9th April 1939 in the Wyndham Cemetery with his wife Catherine Frances (Hanlon) who passed on 13 September 1936 aged 82.

Robert Stobo Wilson died 7th April 1939 at Seaward Downs and was buried 9th April 1939 in the Wyndham Cemetery (not Edendale) - details from his death certificate.