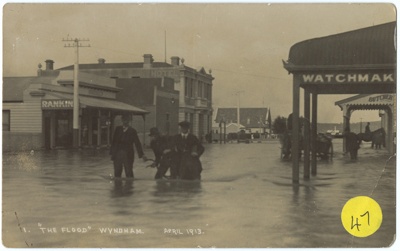 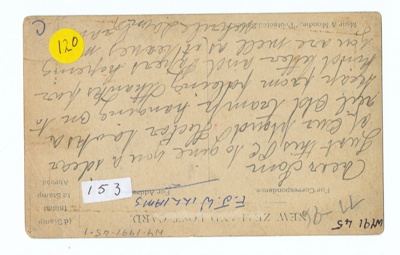 This is a postcard showing the 1913 flood of the Mataura River as it impacted on Balaclava Street, Wyndham. The photograph was part of a series produced by Dunedin based photographers Muir & Moodie.

Wyndham being in the centre of the Mataura, the Wyndham and the Mimihau Rivers, flooding has been an often occurrence in the town's history. On March 27, 1913 heavy rain began to pour continuously for two days. The rain, in combination with melting snow, caused the rivers to rise. The railway embankment between the Wyndham and Mataura Rivers acted as a dam causing the overflowing water to head straight for Wyndham. Huge banks of water swept through the streets and by the 29th people were taking shelter on the top storey of buildings. Horses and drays were used to transport provisions and rescue people from low lying houses. On the evening of the 29th, the rail embankment gave way, allowing the water to disperse along its natural course.

When the railway embankment was repaired, bridges were positioned so that flood waters could naturally run away from the town. With this change, locals expected that they would not have to contend with another flood. Only four-years later, Wyndham once again experienced a major flood.

Disasters (including floods and fires)