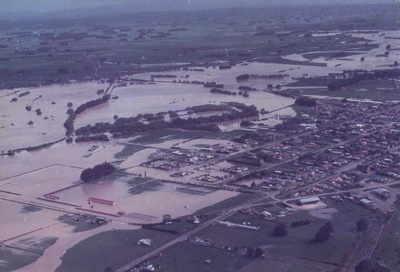 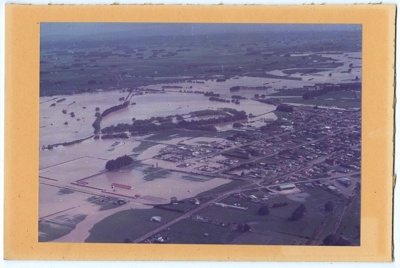 This photograph of Wyndham during the 1978 flood was taken from the south of Wyndham, from the Showgrounds looking north along Balaclava Street.

In mid-October 1978, warnings of a so-called '100 year flood' were issued, after severe electrical storms in some areas and an anticyclone with strong, warm winds caused snow to melt in the Southern Alps. A heavy, steady downpour arrived and over 36 hours, between 114mm (4 1/2 in) and 127mm (5 in) of rain fell on the upper catchments of Otago and Southland. Following, was a fine sunny day but a sudden change came with more heavy rain setting in overnight, and for a further day when the ground became saturated. The local creeks and rivers rose rapidly. At Wyndham, with talk of a 'mighty flood', fifty volunteers gathered and frantically filled sandbags to be placed where needed. On the 14th October, with the peak expected during the night, Civil Defence ordered the evacuation of residents of the Wyndham township (including patients from the Maternity Hospital), which resulted in a steady stream of vehicles travelling via Young's Hill, to the evacuation point at the Mimihau Hall. There, they were cared for, or billets were arranged for the night.

The Mataura River burst its banks at Mataura causing wide-spread flooding there, but that break and one further downstream, almost certainly saved Wyndham. The river peaked at about 4am with only parts of Wyndham being flooded, mostly to the west and south of the township. The river was recorded at 5.08m (normal 1.0m) on October 13th, but may have been higher at the peak time. The next day the residents were able to return home.

Some flood embankment work had been carried out in 1935, but after the 1968 flooding, stop banks were put in place from the Mimihau Bridge to the Mataura River, along the back of the racecourse to Ferry Road and the Lagoon, and have certainly proved their worth over time.

Wyndham has had serious floods in the past and also before European settlement. Dr Menzies spoke of a flood where washouts were visible and debris remained in the tree tops in bush near the site of the Mimihau Bridge. A Māori in his employ, had spoken of how he and other Māori had paddled their canoes over the treetops! There have been many floods in the Wyndham area and some of note were in 1869, 1913 and 1968.

Disasters (including floods and fires)

Hey Rodney, thanks for letting us know. We have changed the dates to the 1978 flood rather than the 1987 flood.

This photo is from the 1978 flood, not 1987. Is a copy of this exact picture in the 100 Year Flood booklet put out afterwards. Also in this picture there is an empty section on Pera St where Alan Leitch's house now is. That house was built before the 1987 flood.