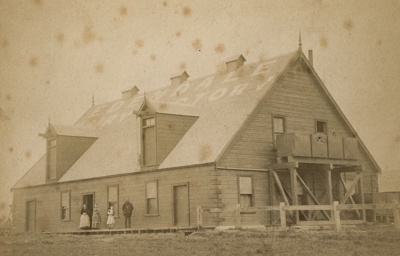 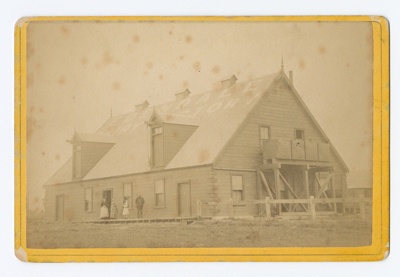 This sepia photo is of the Edendale Dairy Factory taken around 1882. Pictured are Mr and Mrs George Inglis, (the first factory manager) Georgina Faulds (Mrs Cranstoun) their ward and Maggie Inglis their niece.

Thomas Brydone came up with the idea that if the Land Company were to build a cheese factory and purchase a herd to start it, that settlers would be attracted to take up sections. Davidson on a tour to Canada gained blueprint plans for a model factory which was in 1881 in the process of being constructed under the supervision of Thomas Brydone and the Edendale Estate Manager Robert McCallum. In January 1882 the first batch of cheese was in the press. The factory cost 1,200 pounds but won a government bonus of 500 pounds in the second season of production. Built of wood by Thomas Robertson, it was 40 feet by 65 feet and fitted with ‘all the modern appliances for butter and cheese making. Robert McCallum supervised and employed Mr George Inglis, his wife, and daughter to carry out the work and feed the pigs. The factory was supplied by cows owned by the Company and produced 560 gallons with 150 gallons supplied by surrounding farmers. The cows were milked by women and boys who were paid 1 penny per cow. 150 Berkshire pigs were kept to consume the whey.