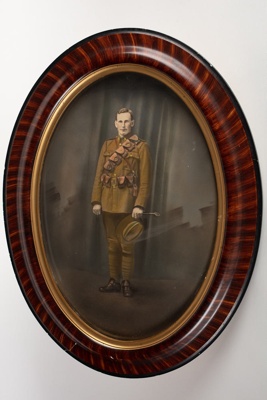 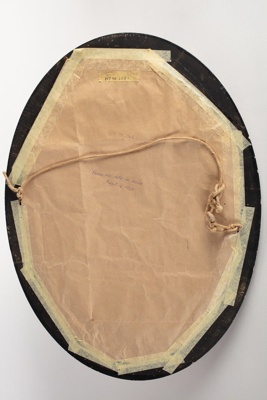 This is a hand coloured photograph of George Munro McEwan in his World War One uniform.

Born at Tokonui on 25 January 1882, George moved with his family to the Carie Estate at Mokoreta/Redan in 1904. In 1915 George enlisted for World War One service embarking for Egypt in January 1916 onboard the Maunganui with the 9th Reinforcements and was originally posted to the Otago Mounted Rifles D Squadron. Serving on the Western Front, George was shot on the right side on 2 June 1917. He was admitted to the 10th Australian Field Ambulance, and rejoined his unit on 11 June 1917. By 28 August 1918, George had been promoted to Corporal. On 24 October 1918, George was again shot in the right side. He was first admitted to the 48th Field Ambulance, and transferred through various Commonwealth clearing stations and hospitals. On 27 November 1918 George was transferred to the New Zealand convalescent hospital, Hornchurch. George arrived back in New Zealand on 22 April 1919. When he was discharged in June, he had served 3 years and 105 days abroad.

Despite having been shot twice, George returned to farming at Carie, and in August 1923 married Ivy May Bews who had been teaching at Mokoreta School for seven years. The couple lived at the Carie Estate Homestead, and every morning George rode to the flaxmill to crank it up. The couple had four children, Dorothy, Neil, Anne Louise and George Jnr (Ferg). George died in 1974. He is buried in the Wyndham Cemetery with May who died in 1979.

Handwritten in blue ink on reverse of frame: 'Frame has date on inside Aug 14 1928'