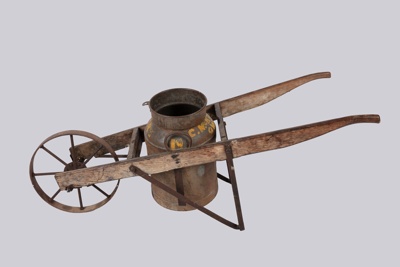 This is Charlie McKelvie's milk can barrow. Charlie supplied the Oware Dairy Factory in the early 20th century and used this barrow to cart his milk cans from the milking shed to his vehicle for transport to the factory.

Charlie McKelvie arrived in New Zealand with his sister Agnes in 1879. Originally from 'Oatfield' Campbeltown, Argyllshire, Scotland, the siblings first settled at Taieri. They arrived in Wyndham on April 29, 1881, the day of the 'Tararua' disaster. In 1882, their widowed mother Agnes (aged 54), and their younger siblings Margaret and Neil immigrated to join them.

Charlie and his mother took up a farm at Mokoreta. When Agnes died in 1907, Charlie purchased a farm 'Greenfield' at Mimihau. Charlie had a pigsty to which he piped whey from the Oware Dairy Factory, and also used factory facilities to slaughter the pigs to send them to the market in Dunedin.

Later his sister Agnes Irwin, her husband Joseph and their children, Bob, Charlie, Joe and Maggie moved in with Charlie. Charlie had no children of his own and when he died, his niece Maggie took over the farm.

Painted in yellow around bottom of neck of can: 'C. McKELVIE
OWARE'