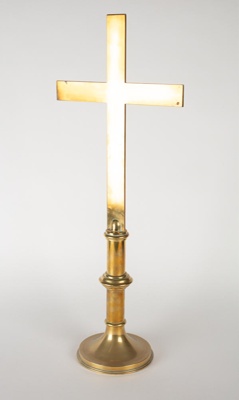 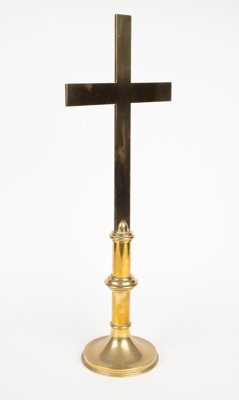 This cast brass altar cross from St Mary's Anglican Church was dedicated to the memory of John Ledyard Evans, 'a faithful and committed parishioner' of the church. John was a chemist and died in 1910.

John Evans, the Wyndham Chemist, was deeply involved with the church from its beginnings. He was a lay reader, giving loyal assistance to the vicars, and he was essential to the operation of the church in difficult times when there was no vicar. At the time of his death in 1909, Bishop Nevill, stated that the church owed its existence in no small measure to John and Mrs Evans.

The original St Mary's was built 1893. Prior to this, services had taken place in the Odd Fellow Hall. A vestry wasn't built until 1912, and not long after this a stable for the Vicar's horse was also erected. Until the 1940s, the average length of the appointment of vicars rarely exceeded three years, and were often of a shorter duration. However, a strong core group of parishioners also assisted, and in 1949, this group formed the New Church Building Fund. The foundation stone for the new church was laid in March 1967.

In 2009, the Anglican Church closed, and since then the building has been converted into a home. Many items were donated to the Museum so that people would not forget that the Church had existed in Wyndham.

Engraved on base: 'To the Glory of God and in Memory of John Ledyard Evans
Died 31 Dec 1909
Aged 76 Years'
'Who served faithfully as Churchwarden and Lay Reader in St Mary's Church for 26 Years'.