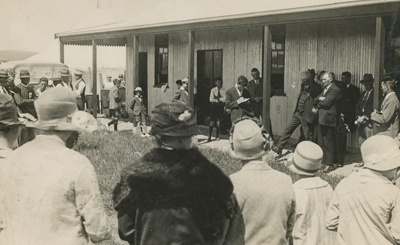 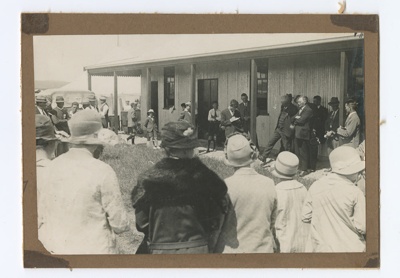 This is a photograph of people attending the Wyndham A.& P. Show in 1928 outside the Pavilion and watching as speeches are given (records state that this photograph was taken in 1925 but is more likely 1928 as in the Cenntenial booklet it states that Mr T. Golden declared the Show open).

Despite being in summer, and no doubt a warm day, note the lady at the front of the photograph is dressed for the occasion in furs.

The Mataura Pastoral and Agricultural Association was formed to hold shows at Gore, Mataura and Wyndham and held its first show at Wyndham on Thursday, March 25, 1875. The Society had a membership of almost 100.

The first Show was held in the centre of Wyndham by the monument, the first Parade was in 1925. The parade is led by the Pipe Band, followed by the President of the society, then the champion and prize - winning animals. These were followed by horses, some with carts or gigs.