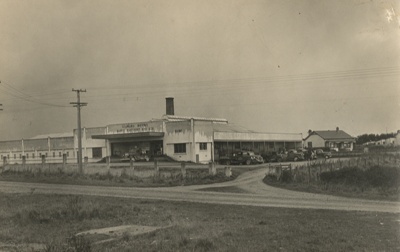 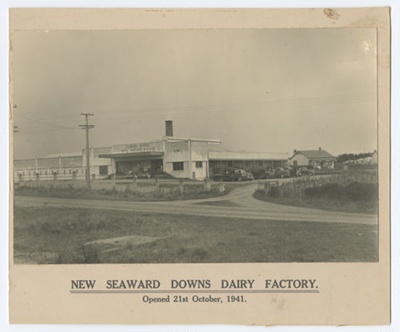 This is a photograph of the New Seaward Downs Dairy Factory which was opened on the 21st October, 1941. The original Dairy Factory was totally destroyed by fire on the 19th October 1940. By 9 am on that fateful day all the milk and the staff had been directed to the neighboring factories. On the same day a special meeting of suppliers decided to build a new factory on the opposite side of the road, on a site which had been purchased in 1915. every effort was made to ensure the new factory and plant was the most modern and efficient available. At a total cost of 17,413 pounds one shilling and seven pence for building, plant and machinery, the new concrete factory was ready to receive milk on 21st October 1941. The cost appeared staggering, but it was offset by the increased efficiency of the modern building and plant. At the height of the season seven vats were filled and 84 big cheeses were made each day.