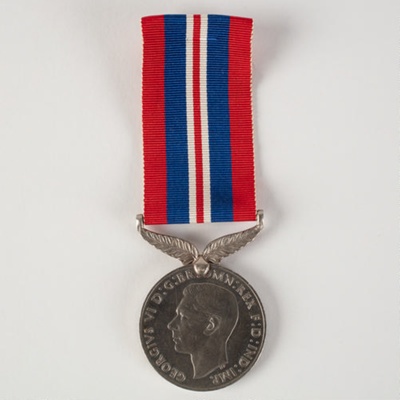 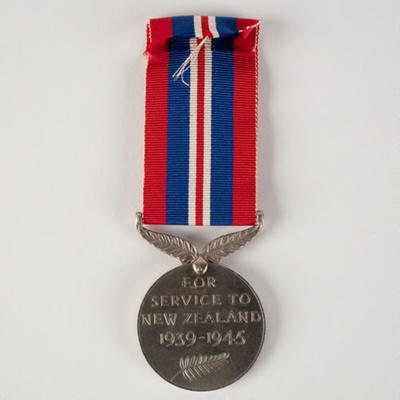 This New Zealand War Service Medal 1939-1945 was presented to Private Thomas Templeton 18816 on his return from the Second World War.

Before going to war Thomas Templeton was a civilian\farm worker. He worked for the Wyndham Town Board as a day man, keeping the streets clean and tidy and he also prepared graves for interment.

The NZWSM was approved in 1946, and was awarded to members of the New Zealand armed forces, the National Military Reserve and the Home Guard, as well as the New Zealand Merchant Navy and Naval Auxiliary Patrol Service. It was awarded in addition to, and worn immediately after, the standard Commonwealth campaign awards for World War Two.

The reverse and mount were designed by the historian and typographer Dr John Beaglehole and the wood engraver E Mervyn Taylor. It was the first distinctively ‘New Zealand' campaign medal, which was emphasised by the use of the fern leaf motif on the reverse and suspension, and the national colours of black and white in the ribbon. The use of the fern leaf motif was made at the request of the Labour party cabinet who wanted 'a fern leaf like on the All Blacks' jersey'. The ribbon on Thomas' medal should be black and white - it is on a red, white and blue grosgrain ribbon