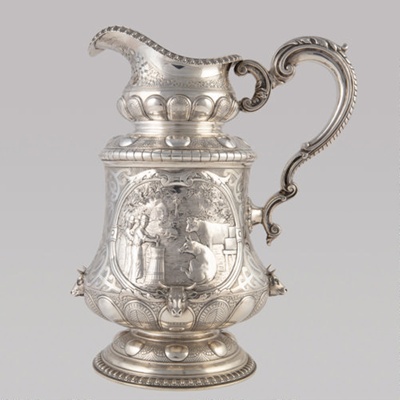 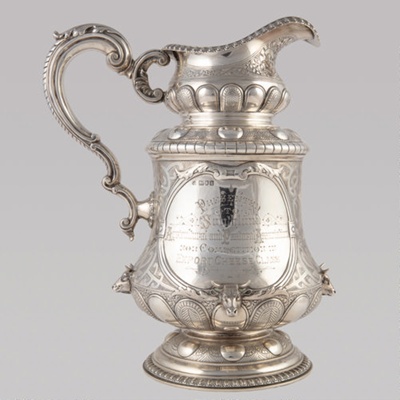 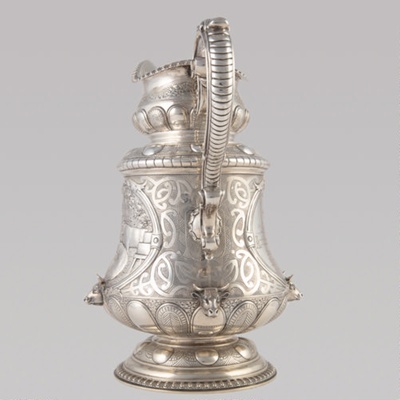 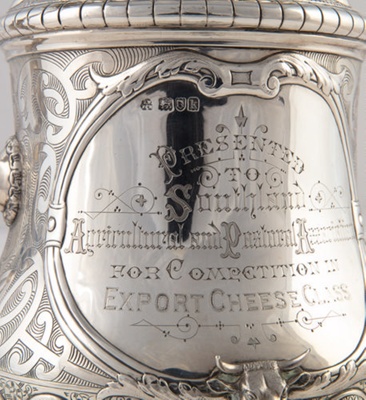 This trophy was presented by the Southland Agricultural and Pastoral Association for Competition in the Export Cheese Class. It was originally known as the '60 Guinea Cup' and would be presented in perpetuity to anyone who won it three times in succession or four times at intervals. The plaques on the rim name John Sawers of Edendale as the recipient in 1906, 1907 and 1908, so after his third win the trophy remained in Edendale.

This is a beautiful example of an Edwardian ewer or trophy jug and the design truly reflects the theme of the award. The central panel depicts farmers churning milk, with a contented herd looking on, and finished cheeses on display. The homestead in the background is sheltered by cabbage trees, and the overall effect is of a hard working yet productive Eden. The four applique mounts around the lower edge are cow's heads. Also of note are dense koru style engravings which complete the body of the jug, and the other stylised New Zealand motifs on the repoussé rim and underneath the lip. The acanthus handle and beaded details complete the silversmith's fusion of design, and although further plaques were incorporated for future winners of this remarkable trophy, the quality of the cheese that was produced under John Sawer's management meant that they were never needed and would remain as blanks in perpetuity.