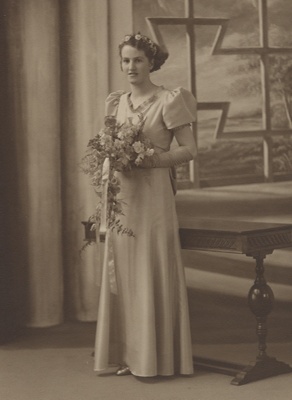 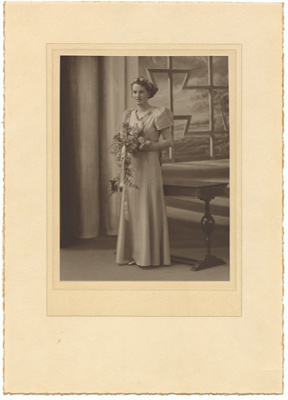 This is a photograph taken in 1938 of Sadie Frame, when she attended as a bridesmaid at her sister Thora's marriage to Mathew Milburn. Sadie, aged about 20 years, wears a long frock, styled with a frilled v-neck and puffed sleeves.

Sadie's parents were Annie (nee Slater) and Andrew Strang, and her siblings were Thora, Andy, Arthur, Isabel, and later a stepsister Shirley McPherson.

She worked at her stepfather’s newspaper office, 'The Wyndham Farmer', where her brother Arthur was a compositor, and between 1942 and 1945, Sadie was employed at the Wyndham Post Office as a World War Two appointee.

Sadie married William (Bill) Frame, and their home was at the Frame family farm, 'Fairview' at Mimihau. Their dairy herd supplied the Wyndham Dairy factory, a short drive down the hill to deliver the milk cans by tractor and trailer. Bill served for a time, as a Director for the Wyndham Dairy factory. Later they changed to sheep farming.
Their family of two boys were Russell, who now lives in Australia, and Bryan who died young in his 40s.

Sadie's interests were tennis, gardening, floral art, Mimihau Country Womens' Institute and she sang in their choir. She was also a member of the Wyndham Presbyterian Church choir.

The house at 'Fairview' unfortunately burnt down about 1960, and was replaced with the present brick and roughcast house. In 1973 Sadie and Bill retired off the farm to live in Gore.