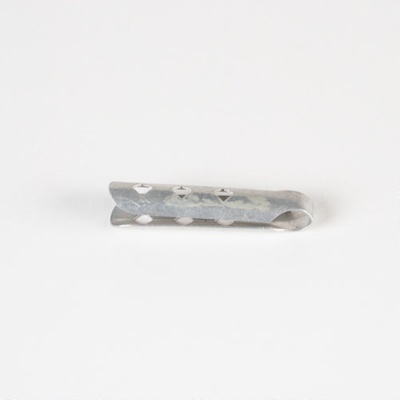 This is a tubegauze applicator which was used by Doctor Hewat at his Wyndham practice.

The applicator is designed to help put tubegauze on; tubegauze being a tubular bandage ideal for the securing injured fingers or toes. It can be widened or narrowed depending on the patient's finger size.

About the Manufacturer, Zimmer:

Justin O. Zimmer founded Zimmer in 1926 when he came home angry with his employer. Having been a national sales manager for a Warsaw, Indiana, splint company for about five years and having sold the firm’s splints for 20 years, Justin knew the market and could recognize a good idea, even if his employer could not.

When he suggested the company add aluminum splints to the line, and asked again if he could buy an interest in the company, the widow of the company’s founder said ‘You know, Justin, you are just small potatoes!’. From there, Justin decided to show he was no small potato and start his own business in competition with his old employers.

His new company quickly outsold the old firm and gained market leadership in its first year of business. Today, Zimmer is a world leader in orthopaedics, employs nearly 8,500 people serving 100 countries, and offers more than 100,000 products.

Doctor Hewat took over the Wyndham Practice from Doctor Baird in 1952. Although he only intended to stay in the town for a short time, he ended up practicing until his retirement in 2001. In the early days, Doctor Hewat held clinics from Woodlands to near Clinton and out to the South Coast. In later years, with the improvement of roads, patients travelled to Doctor Hewat's surgery on Balaclava Street. For most of his time, Doctor Hewat did not accept appointments, instead tending to the his patients on a first in first served basis. This often resulted in cars lined way up the street right to the Presbyterian Church.

Doctor Hewat remained in Wyndham after his retirement and died in 2003.