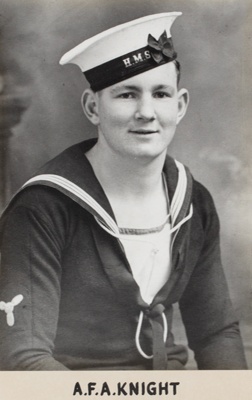 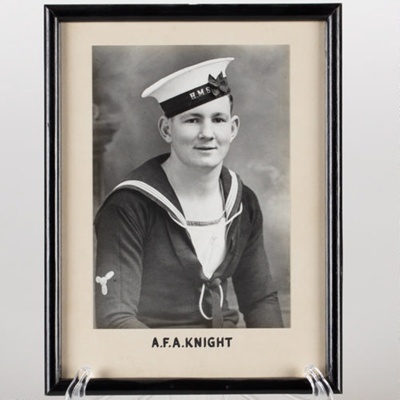 This photograph is of Arthur Franklin Alex Knight (Lex 5260), a local man who was killed during WWII.

The Son of Arthur Knight, Lex came from Mataura Island and served with the Royal New Zealand Navy. He was a First Class Stoker on board the HMNZS Leander and was killed when the ship was torpedoed on July 13, 1943. He is remembered on the NZ Naval Memorial, at the Devonport Naval Base, HMNZS Philomel, Devonport Auckland, NZ.

On July 13, 1943, the Leander was with Rear Admiral Walden Lee Ainsworth's Task Group 36.1 which consisted of three light cruisers: the Leander and US ships the Honolulu and St. Louis. The task group also included ten destroyers. At 01:00 the Allied ships established radar contact with the Japanese cruiser Jintsu, which was accompanied by five destroyers, near Kolombangara in the Solomon Islands. In the ensuing Battle of Kolombangara, Jintsu was sunk and all three Allied cruisers were hit by torpedoes and disabled. The Leander was hit by a single torpedo just abaft 'A' boiler room. 26 crew from the boiler room and the No.1 4-inch gun mount, immediately above, were killed or posted missing. The ship was so badly damaged that she took no further part in the war. She was first repaired in Auckland, then proceeded to a full refit in Boston.