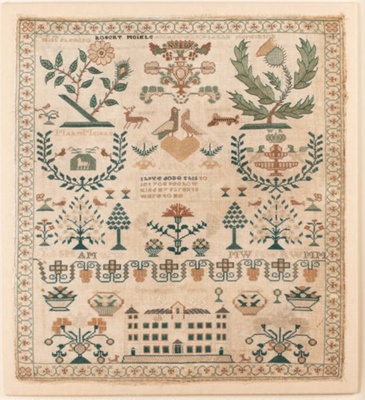 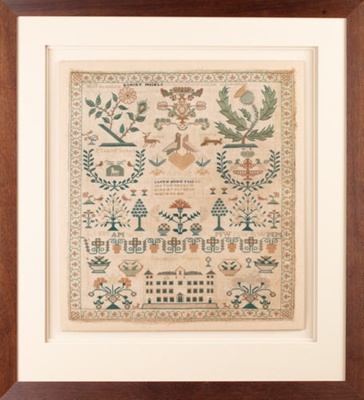 This beautiful Scottish sampler, completed in 1836 is full of interest and mystery. Research is ongoing, but here are some details about what we know of its story so far ...

Making samplers was once a common means of teaching girls letters and numbers, and also demonstrated domestic skills and personal accomplishments. with religious and moral inscriptions often featured. Scottish samplers are unique in that they frequently include the initials or names of extended family members.

Samplers were valued when they were made and frequently displayed. Unframed they were easily portable, and could perhaps be given as a keepsake to a family member travelling to New Zealand. This sampler was 'discovered' by Ena Sinclair after the death of her elderly aunt. No one in the family knew of its existence, but it is thought that Ena's grandfather Robert, born 1855 in Avondale, Lanarkshire, brought the sampler to New Zealand. Upon his arrival, Robert worked at the Morton Mains Estate and later owned land at Menzies Ferry.

Several names are stitched across the top of the sampler: Miss Fleming, Robert Meikle, Andrew Wilson, and Sarah McPherson, with one other name stitched in full, Mary Meikle, assumed to be the maker. Unconfirmed genealogical research suggests that Mary was born in Avondale, Lanarkshire, to Robert Meikle and Sarah McPherson in 1821. There is also a record of an Andrew Wilson marrying a Sarah McPherson in 1826, presumably a second marriage for Sarah. (The name 'Robert Meikle' is stitched in black thread, another Scottish sampler characteristic, suggesting that by 1836 he had died.) The eight initials might stand for the maker’s brothers and sisters, cousins, grandparents or other relatives, and the mysterious “Miss Fleming” could perhaps be a teacher.

Whilst many samplers include a representation of a school or house, this sampler includes the words 'Solomons Temple', and again this is a not uncommon feature in Scottish samplers of this period, and was regarded perhaps a symbol of virtue.

All this gives rise to a further mystery ... a casual online search will reveal an extraordinarily similar sampler made in 1833 by Helen Dougal, then aged about 16, living in Lesmahagow, Lanarkshire, Scotland.

Perhaps Mary Meikle, who worked this sampler in 1836 and Helen Dougal who worked her sampler in 1833 worked from a similar pattern book, or had the same needlework teacher? Were the girls related or known to each other?

Perhaps our ability to undertake digital cataloguing and extend our searches ever further will one day provide more evidence, and if there was indeed a link between Mary and Helen it would be wonderful to acknowledge this.

mounted in double shadow box with a cream card mount.