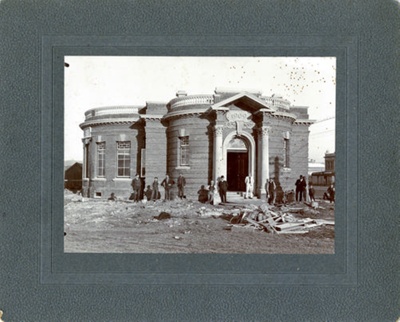 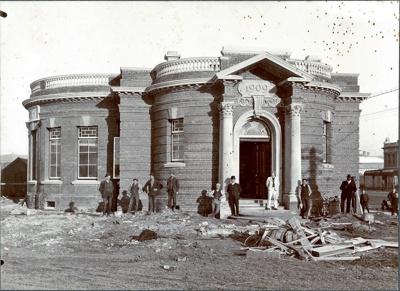 This is a photograph of the newly constructed Gore Coronation Library, surrounded by men and construction debris.

The Library was built in 1909-10 to house & provide access to their 2125 books, and enough room to add another 10,000 as the collection grew. For the citizens of Gore, this building provided a freely accessible reading room which took up a third of the space and was widely used.

The library was one of eighteen New Zealand libraries to be built using Carnegie funds and the only one fully funded by his foundation. Scottish-born American businessman Andrew Carnegie never visited New Zealand, yet, his policy of establishing free libraries across the English-speaking world had a lasting impact on the country. Though New Zealand had libraries in the early twentieth century, these were private collections which often required subscription fees. New Zealand made 25 applications to the Carnegie fund, Gore being one of the successful applicants.

By the 1980s, the library collection had out-grown the space and shifted to a new building. The old building underwent extensive renovations and in 1984 opened as the Eastern Southland Gallery.