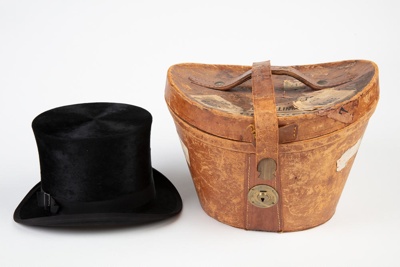 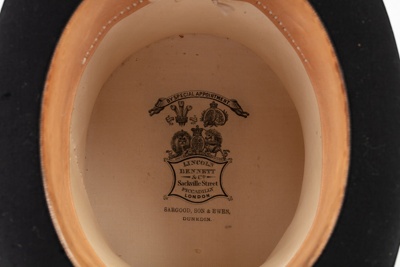 This top hat was co-owned by two men who made significant contributions to Gore J Howard Dolamore and Dugald Poppelwell.

Journalist Alfred Dolamore purchased the Mataura Ensign in August 1882. He extensively developed the newspaper, later incorporating several local papers. Not long after the purchase, he went into partnership with his younger brother John Howard Dolamore. Alfred died on February 28 1895 leaving Howard to run the business with his sister-in-law and later wife, Amelia. In 1920, he formed the Gore Publishing Co Ltd, the shareholders and directors being members of his Ensign staff. Howard gave many gifts to the Gore Borough during his life and in death remembered the Borough in his will, forming a charitable trust which continues to make donations to local amenities and youth groups.

Lawyer and long time mayor of Gore, Dugald Poppelwell (1863-1939) was a champion of Gore and the community and contributed greatly to the early development of Eastern Southland.

Civil role: A busy legal career brought Poppelwell to local prominence. He was elected to the Gore Borough Council in 1893 and became Mayor in 1895. He served on the Council again from 1900 to 1903 and as Mayor four times from 1904 to 1931. Poppelwell was involved in establishing many major public works in Gore.

Poppelwell was instrumental in the establishment of the traffic bridge which serves the main highway. Poppelwell may have worn his top hat at the opening of the bridge on 29 July, 1896. He also helped establish drainage and electricity schemes, public gardens and the Croydon Bush public reserve which the government set aside 200 acres for. This reserve has been added to and today is 2,334 acres.

Environmentalist:
Poppelwell was an early environmentalist who pioneered botanical research in Otago and Southland. In 1924, his intervention saved the Bowen Falls at Milford Sound from being harnessed for hydroelectric power. Poppelwell shared his knowledge through lectures, wide publication and by becoming a member of numerous organisations. A fit and enthusiastic man, he also led local tramping trips where he would impart his knowledge and appreciation of the native bush.

Community role:
Poppelwell was active in Gore sporting and social clubs as well as the Catholic Church. He helped establish Seddon Memorial Hospital and the Gore Library. This sense of community is reflected through the donor's belief that Poppelwell may have shared the hat with JH Dolamore, the owner of the Mataura Ensign. Poppelwell was more than a man with a fancy hat, he was a community leader.