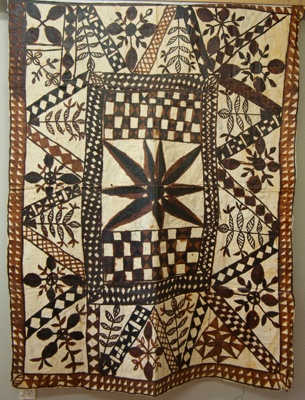 This tapa has a hand-painted, overpainted design in brown and black. The central motief is of a large star. Working out from this is an inner border of checks, wide zig-zag band with leaf and flower sprays painted between them with an an outer border of triangles.

Tapa is a bark cloth made in the islands of the Pacific Ocean.

In former times the cloth was primarily used for clothing, but now cotton and other textiles have replaced it. The major problem with tapa clothing is that the tissue is just like paper: it loses all its strength when wet and falls apart... Nowadays tapa is still often worn on formal occasions such as weddings. Another use is as blanket at night. It is also highly prized for its decorative value and is often found used to hang on the walls as a decoration.

"The tapa cloth is part of the Original Museum Collection, pre 1928.
Identified by Sean Mallon, Te Papa as being from Samoa.

"Siapo is the Samoan name for decorated cloth made from the u'a (paper mulberry tree). First the bark is peeled off the tree in strips. The inner bark is separated, scraped clean and pounded, then pasted together to make the size of cloth required. The piece is decorated in freehand or by taking rubbings off a relief pattern carved into a board"" (=kupesi)

Siapo mamanu is bark cloth that has been decorated freehand, featuring plant and animal motifs... the dyes were made from various plants and trees and an earth ochre called 'ele."" (Te Papa: 2004: Icons nga taonga of the Museum of New Zealand Te Papa Tongarewa, Te Papa Press, Wellington, p. 281)

Comparision with tapa shown in the book by Roger Neich & Mick Pendergrast: 1997: Pacific tapa, pp. 24 - 25 suggest this tapa comes from Samoa. They note: 'freehand painted tapa was very popular in Samoa in the later years of the nineteenth century and into the 1920s when it was more common than siapo dyed by rubbing on a design tablet. By the 1970s in Western Samoa, freehand siapo had almost disappeared and very little was seen in circulation. Lavalava sized sheets of siapo vala, decorated by the 'elei rubbing process on flat wooden upeti, had become the main type of siapo produced, both for exchange among Samoans themselves and for sale to tourists'."