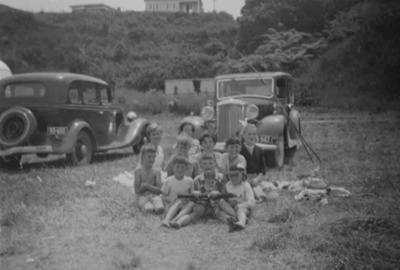 Worsfold family at Mangawhai Heads camping ground on Boxing Day in the 1950's.
The toilet block is shown in the background. The fishing rods propped against the car were homemade out of 'tanekaha' with the bark still on the 'handle' area. Bill Worsfold is holding a telescope that was given as a christmas present.

Back Row : Marie Ries (lady sitting in the middle in front of car)