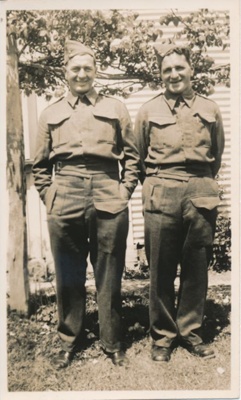 From L to R. Jack Hook and Samuel Pirimona Francis, known as Sammy, b 1915 d 1989. Both men were in the Army during WW2 and served in Italy. Jack Hook worked at the Public Works Depot on Coal Hill Road, Mangawai, 1936. He was killed aboard his ship during WW2.
Sammy Francis grew up in the Mangawai District.