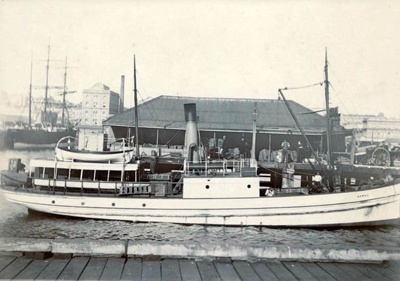 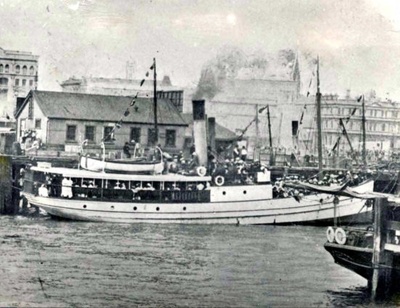 A. S.S.Kawau tied up at Auckland wharf.
B. S.S.Kawau at Auckland.
The ' Kawau' was a steam ship that worked the coastal waters around Mangawai and Auckland. Captain Lesley Moir, was the first master and his brother, John Moir, was 1st mate, until 1904 when the Moirs retired. Captain Enoch Olsen took over until circa 1920.
The first 'Kawau' was built in 1899 by R Logan at Auckland, for JS Hick-Ross of Kawau Island and was sold to the Coastal Steam Ship Co. in 1901. She was then owned by Northern Steam Ship Co. who had to relinquish her to the NZ Navy as an 'Examination Ship' (to which all vessels entering and leaving the Port of Auckland were required) at Auckland on 12 December 1939. She was returned to the Northern Steam Ship Co. on the 9th July 1940. She was dismantled and used as a yacht club-house in the Tamaki River where she finally rotted away.