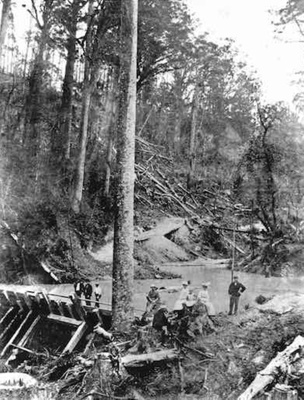 Kauri dam between Tara and Pukekaroro, behind what is known as 'Mad Camp'.
The kauri tree on the left was cut into two 60ft logs which passed down to Mangawai Flat about 1910.The logs were pulled behind a bullock team or an old traction engine. The tree from the stump on the right, with 2 women and child sitting on it, was 110ft in length.
The kauri trees were felled by W. Wilson and Logan Balderston.

The photograph was taken by F Causley.
It was published in the Weekly News, 1908.
The Caption reads " When sufficient water has gathered behind the dam, the sluice gates are opened. The great logs being borne along like straws of the ensuing flood, which carried them down to the timber mills near the sea coast."