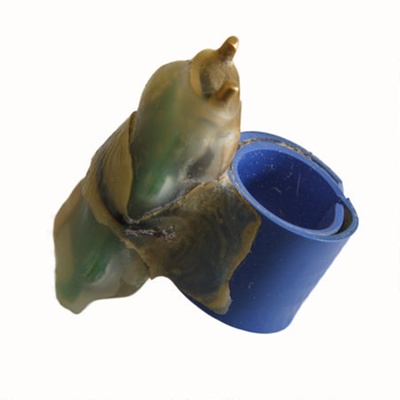 A geolocator with a blue band which is attached to a bird. Leg mounted, light sensitive with a 2 year life span, they were attached of a number of Godwits in New Zealand. They recorded sunrise/sunset, latitude, longitude, breeding times, places and a number of other items.
This gelocoator was attached to a male Godwit at Foxton Beach in 2008. His banding gives him the title 6YWBW. In 2008 he was recorded as flying for 7 days straight to Yalu Jiang Natural National Nature Reserve in China and then onto Yukon - Kuskokwim Delta National Wildlife Refuge in Aslaska. In 2009 he stopped for 2 days in South Korea. In 2008 his locator failed in Alaska . A new geolocator was fitted in 2009 and recorded him travelling directly from Alaska to Foxton. He has since made the round trip 2 more times.
Geolocater is in good condition.