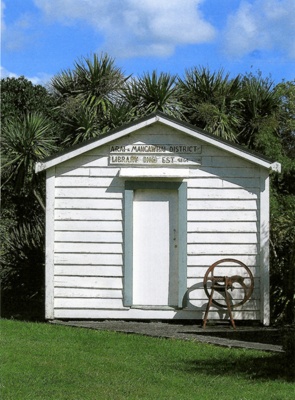 DECOMMISSIONED: 4th October 2016. OWNERSHIP AND POSSESSION HAS BEEN TRANSFERRED TO THE PIONEER VILLAGE TRUST, MANGAWHAI

The Mangawhai and Arai District Library building. The Arai library was established in 1864 and the Mangawhai Museum still have some of the earliest books.
The library initially operated out of the Arai church which later burnt down. An earlier library building was replaced by this one, built for £23, in 1928, on Cemetery Rd, on land donated by Mrs. Martha Shepherd.
In approximately 1970 it was shifted to the corner of Te Arai Rd corner and eventually to a site by the Library Hall, Mangawhai Village, in 1987. In February 2017 it was moved to the Pioneer Village on MolesworthvDrive, Mangawhai Heads.
The Arai Library and Arai Church Trust was established in 1886 and a list of trustees added to over the years includes the names W.B.Farrand, T.Sturch, A.S.Boldero, C. Eyre, J.Western, (the next names were later additions),Shannon, Ellis, T.Eyre, Ormiston, Lawrence, Benton, Ryan, Carlif, Richards, Sellwood, Brown and Ryan
The building was constructed by community volunteers in 1928.