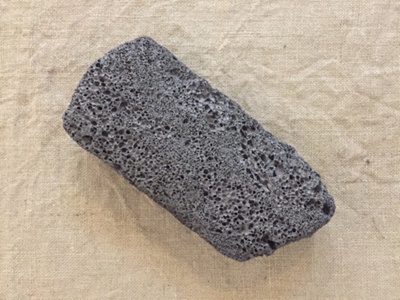 This volcanic scoria block was found by Mr Bill Knox on the 7th November, 1963 on Tautuku peninsula.
It is similar to two other shaped scoria blocks found at King’s Rock in the Catlins in 1939 and on the Old Neck at Stewart Island in 1973.
All three locations are Moa-hunter occupation sites dating back some 800 years.

Les Lockerbie began research on the King’s Rock and the Tautuku blocks as he recognised their resemblance to Mehetian marae blocks held by the Otago Museum. Further research by Dr Ross Ramsay, Russell Beck and Graeme Collett confirmed that all three scoria blocks are exotic to New Zealand. The supposition is that these blocks were carried here by early Polynesian navigators.

Chemical analysis of the blocks shows that there is a strong possibility that all three originated from the Society Islands with the most likely source being the small, very young volcanic island of Mehetia – east of Tahiti.

Tautuku peninsula is located a few miles south of Papatowai. Beneath the forest at the southern end of the beach and on the high dune on the peninsula, much evidence of early occupation has been found.