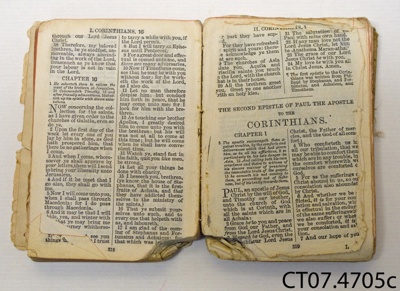 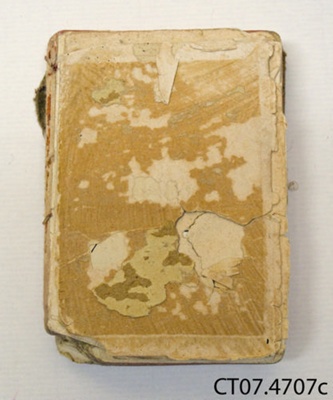 Bible; a very small copy of the New Testament, presented by the British and Foreign Bible Society to the Members of the Victorian Contingent of the Australian Imperial Force, December 1914.

This bible was in Sergeant Major Georgia Francisco Almond Sargeant's breast pocket when he was shot one of several times at Gallipoli in 1915. The bullet was lodged in the bible, and saved his life.

Sargeant enlisted in the New Zealand Expiditionary Force, at about the age of 40, after spending many years in the British Armed Forces. He landed at Gallipoli on 25 April 1915, as 8/126 with the Otago Infantry Batallion, and was evacuated wounded on 8th May. In the few days he was there, he had been hit a number of times – in a waist belt carrying a watch, in a money belt and most importantly in a New Testament bible in his breast pocket, which saved his life. Sargeant was discharged in 1916 as medically unfit, and was awarded the New Zealand Meritorious Service Medal.

The family lived in Royal Terrace, Owaka, and after he returned from Gallipoli he returned to his old trade repairing boots and shoes.

Handwritten inside the front cover: "To my dearest / Daughter Ruby, / Dad"