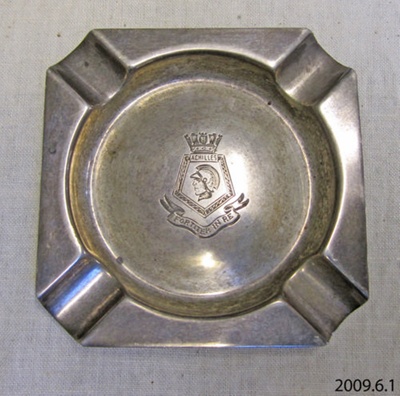 Ashtray; a small, silver ashtray, made in commemoration of HMNZS Achilles. The centre of the ashtray is engraved with an emblem for the ship consisting of a crown over a pentagon containing the profile of Greek soldier, beneath which is a banner reading: 'Fortiter In Re', Latin for 'firmness in action'.

HMNZS Achilles was a Leander class cruiser which served with the Royal New Zealand Navy in World War II. She became famous for her part in the Battle of the River Plate, alongside HMS Ajax and HMS Exeter.

In the early morning of 13 December 1939, a force consisting of Achilles, HMS Ajax and Exeter detected smoke on the horizon, which was confirmed at 06:16 to be a pocket battleship, thought to be Admiral Scheer but which turned out to be the Admiral Graf Spee. A fierce battle ensued, at a range of approximately 20 kilometres. Achilles took some damage: four crew were killed, and her captain, W. E. Parry, was injured. In the exchange of fire, 36 of Graf Spee’s crew were killed.
The range reduced to about 4 nautical miles at around 07:15 and Graf Spee broke off the engagement around 07:45 to head for the neutral harbour of Montevideo which she entered at 22:00 that night, having been pursued by Achilles and Ajax all day. Graf Spee was forced by international law to leave within 72 hours. Faced with what he believed to be overwhelming odds, the captain of the Graf Spee, Hans Langsdorff, deliberately sank his ship rather than risk the lives of his crew.