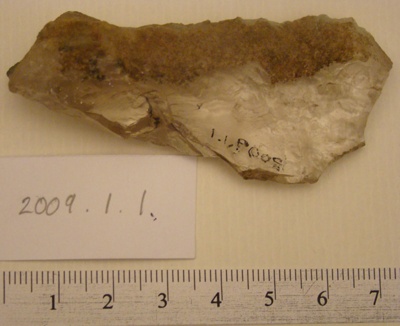 Flake tool from the Manuka Point site at Pounawea. Made from quartz rock crystal possibly originally sourced from Nelson. Flake tool is transparent with two phase inclusions, portion of original exterior along one side showing development of crude crystal faces. From the Les Lockerbie collection of early moa-hunter archaeological material.

Since the 1920s several archaeologists have taken a keen interest in early moa-hunter settlements which were located at Cannibal Bay, False Island, Manuka Point-Pounawea, Hinahina, King’s Rock and Papatowai Point.

Waitaha and Ngati Mamoe inhabited the land and islands from Rakaia to Rakiura (Stewart Island), Ruapuke and along the coast as well as inland to Lakes Hawea, Wanaka and Wakatipu. Using the Waitaki, Mata Au (Clutha River), Mataura and Waiau rivers as highways, they were hunter-gatherers.

Les Lockerbie, who was reared in the Maclennan district, collected artifacts at Papatowai in the period 1924-1936, and it was he who aroused the interest of the Otago Museum, with the result that David Teviotdale undertook digging at Papatowai in 1936-1938.

Later, Lockerbie continued the search at Papatowai and elsewhere, before undertaking a lengthy investigation at Manuka Point. Here he was able to use radio-carbon dating to confirm the age of the artifacts and materials uncovered. A very positive outcome was the publication of the results of his research and the creation at the Otago Museum of an excellent display which shows the layered strata of the site.

In the 1980s Dr Jill Hamel carried out further research in the course of her doctorate studies, which included a dig at Manuka Point.

Today the findings of these archaeologists enable us to gain some perspective of moa-hunter life in the early period of New Zealand pre-history.